Cars run into each other all the time in Los Angeles, but perhaps the most dangerous type of auto accident involves pedestrians and bicyclists. People who get hit by a car while crossing the street, walking on the shoulder or riding alongside in a bike lane are at great risk of getting seriously hurt.

The National Highway Traffic Safety Administration (NHTSA) has recently released statistics from 2018 that indicate it is not only becoming riskier to be a pedestrian in America, but in California in particular, it is more dangerous than ever. There was a more than 3% increase in the number of pedestrians killed in traffic crashes in 2018, totaling 6,283 deaths — the most deaths since 1990. 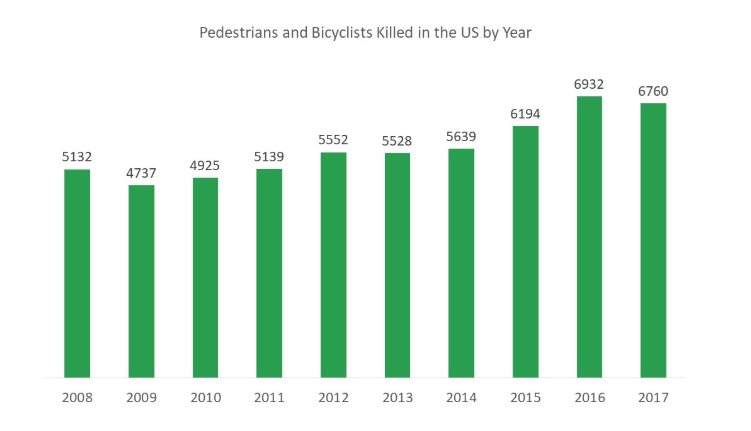 The Basics of Pedestrian Safety

The CDC recommends that people walking outside at night wear retro-reflective clothing and carry a flashlight, to make themselves extra-visible. Most pedestrian deaths occur in urban areas, at non-intersection locations, and at night. Pedestrians should use crosswalks or intersections when possible, and stick to sidewalks. When there is no sidewalk, use the shoulder facing traffic. If you have been using drugs or alcohol, avoid using electronic devices like earbuds which can further diminish your awareness.

Those advanced in age should take extra care and caution. Pedestrians aged 65 and older accounted for 20% of all pedestrian deaths and an estimated 10% of all pedestrian injuries in 2017. A few factors that contribute to pedestrian accidents and injuries is higher vehicle speeds, which increase both the likelihood of a pedestrian being struck by a car as well as the severity of injury.

The Basics of Bicycle Safety

There is already a large population of California bicyclists on the roads, but come spring and summer, the bicycle lanes will become busier. That means that there is more room for disaster and that drivers as well as bicyclists must be vigilant about avoiding traffic accidents.

Bicyclists often get injured not when a moving car crashes into them, but when they crash into the door of a parked vehicle. When a motorist parks his car, he must check around him for an oncoming biker before opening his car door. Crashing into a door might not sound as serious as a car crash, but the impact can seriously injure a bicyclist. They can sustain broken bones, a head injury and more.

The research and science say clearly: wear a helmet while biking. An analysis of many thousands of cases nationwide concluded if a helmet was not worn, there was a much higher likelihood a bicycle accident would result in traumatic brain injuries. More mature riders seem to know that, with statistical data clearly indicating that helmet use goes up commensurate with increased age. Quite simply, the nation’s youngest bicyclists are most often the riders who forgo helmets (obviously, in states without stringent helmet laws).

In 2016, California looked to revise the legislation regulating automakers ability to test their autonomous vehicles on the road. One major concern with autonomous vehicles is their ability to be manipulated by others on the road, potentially leading to some dangerous scenarios. Take the scenario of the bully pedestrian. In a dangerous confrontation, the person inside the vehicle could be trapped, as the vehicle must obey the laws of the road and society. One of the basic tenants of those laws is to prevent pedestrian accidents. The way street legal vehicles are set up now, drivers can assume control of the vehicle, but many proposed designs do not include a steering wheel for manual emergency control over the vehicle.

Under California law, pedestrians can still file a claim against the driver for the driver’s portion of fault in the accident if a citizen is hit while jaywalking. Many California laws protect pedestrians and bicyclists from health and financial ruin if struck by a vehicle. An experience personal injury lawyer can advise you or your family on legal rights and how to pursue fair compensation for injuries or wrongful death.

Key Steps to Take After A Pedestrian or Bicycle Injury

Collisions are traumatic, shocking and often fury-inducing. Keep your wits up and temper down as much as possible.

Injuries, even some serious ones are not always readily apparent in the minutes after a crash. Ask (or tell) the driver to stay as well as any witnesses. If you were the victim of a hit and run, do your best to remember the make, model and color or ask witnesses to quickly take a photo.

A police report needs to be filed at the scene of the accident. Don’t delay, don’t hesitate because your injuries seem fine or minor. Don’t feel bad for taking up the police officer’s time or the driver’s time. You are the one in need of help and protection right now.

Pen, paper, cell phone, napkin: anything that can take notes on the situation are your friend here. Get the driver’s information and insurance. Take photos on a cell phone, camera or have a witness help to record the scene.

Again, not time to act tough here. Get to your doctor or a local E.R. immediately. The hospital and its caregivers are there for just the sort of situation. Unless you are a physician yourself (in which you already know you should still go to the hospital), being examined by a health care professional is the only way to know how badly you are injured.

A free consultation is offered by most, if not all, personal injury attorneys which can help you gather more information on your situation. Don’t speak to an insurance company without consulting an attorney first. No one has your best interest at heart except you and if you hire them, your lawyer.

Post-Coronavirus in the Outdoors

In the coming weeks and months, the U.S. will be become more open. More bicyclists and pedestrians will make their way onto the streets of Los Angeles and other cities and towns across America. Remember to be extra cautious and safe when biking and walking around, as collisions are likely to escalate post-lockdowns. Longtime Los Angeles Attorney Scott J. Corwin is available 24/7 for Californians injured in an accident. Call (310) 683-2300 or send a direct email now.